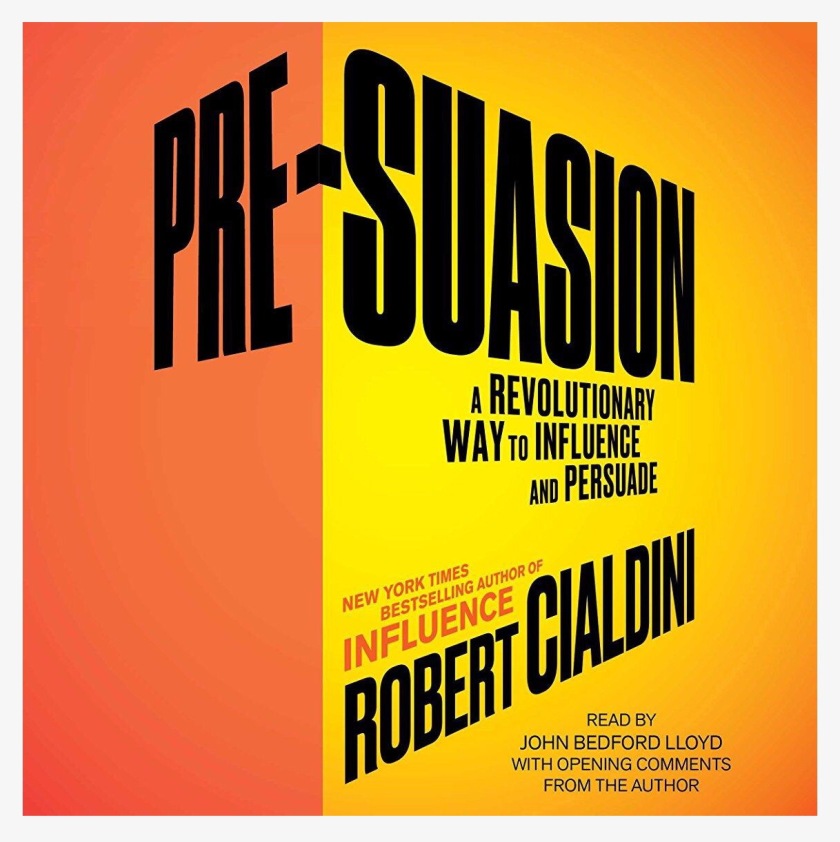 Synopsis: “The author of the legendary best seller Influence, social psychologist Robert Cialdini, shines a light on effective persuasion and reveals that the secret doesn’t lie in the message itself but in the key moment before that message is delivered.

What separates effective communicators from truly successful persuaders? Using the same combination of rigorous scientific research and accessibility that made his Influence an iconic best seller, Robert Cialdini explains how to capitalize on the essential window of time before you deliver an important message. This “privileged moment for change” prepares people to be receptive to a message before they experience it. Optimal persuasion is achieved only through optimal pre-suasion. In other words, to change minds, a pre-suader must also change states of mind.

His first solo work in over 30 years, Cialdini’s Pre-Suasion draws on his extensive experience as the most cited social psychologist of our time and explains the techniques a person should implement to become a master persuader. Altering a listener’s attitudes, beliefs, or experiences isn’t necessary, says Cialdini – all that’s required is for a communicator to redirect the audience’s focus of attention before a relevant action.” -Amazon

Influence easily made it into my top 10 books, so it’s safe to say that picking up this book was an easy decision. I’ve been on this sales, negotiation, marketing train the past few months so I figured I should keep it going.

While the ideas and concepts posed by the book were great, I couldn’t help but feel like this book has a lot of extra fluff. Similar to Cialdini’s last book, I felt his main points could have been summarized into a few key points. The rest of the book was mostly a series of drawn out explanation and anecdotes to support his points. While I do see value in driving the point home with scientific research and explanations, I found myself wanting to skip past to get to the meat. Even then, the meat was pretty predictable.

Overall, great ideas especially if you’re an influence practitioner (salesperson, marketing manager, etc). For the average person, the information is nice to know but not necessary. The last book was written specifically to give the average consumer insight into the tactics and principles used against them. However, this book is a more in depth look into what can increase your influencing skills.

Nutshell: Influence practitioners should target the privileged moments before the interaction to greatly increase their effectiveness.